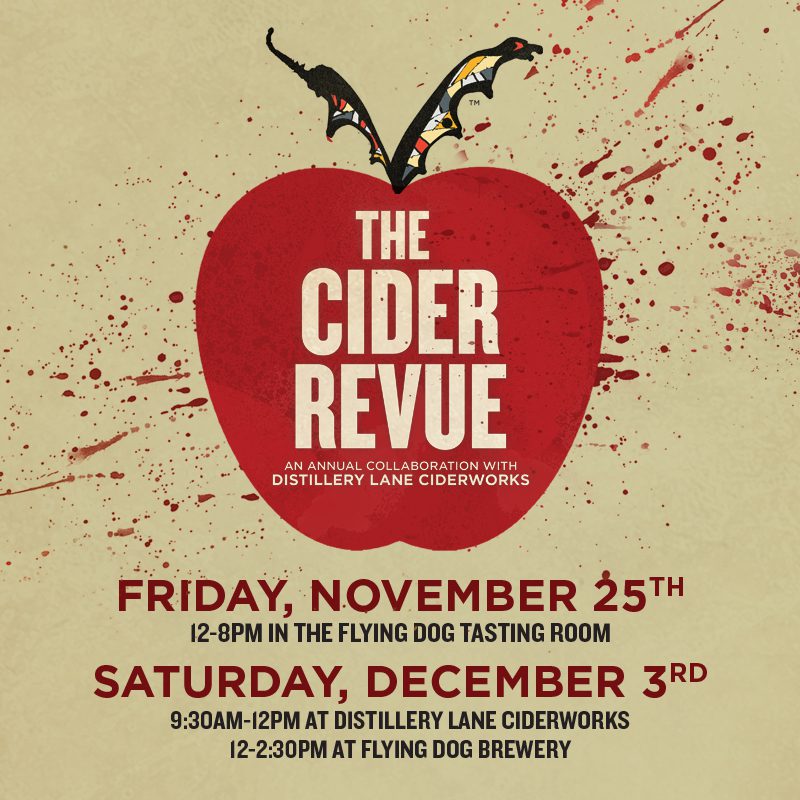 No longer will you watch in horror as Grandma unleashes a fury of punches at Hallmark on Black Friday. Avoid the mob and stop by the brewery on Friday, November 25 for The Cider Revue, a day dedicated to our Orchard Ale collaboration with Distillery Lane Ciderworks.

Distillery Lane Ciderworks is one of only three cideries in Maryland and was started 12 years ago by Rob and Patty, a husband-and-wife team. They planted 600 trees in the first year and now have 3,000 trees and 50 different varieties. All apples are picked by hand and all of their ciders are made from estate-grown apples. Bonus: They're located in Jefferson, Maryland, which is just 13 miles from the brewery.

Orchard Ale is is a blend of two parts Blonde Ale mixed with one part cider from Distillery Lane. The cider we use includes a mix of Bulmer’s Norman, Tremlett’s Bitters and Summer Rambo apples. Yeah, you read that right. Summer Rambo Apples. We added Hallertau hops for bittering and the end result is a crisp green apple flavor complimented by subtle Belgian yeast notes. You'll be able to try this year's Orchard Ale alongside our 2015 Orchard Ale, which has been hibernating in a foeder (a giant wooden vessel for aging) for the last tenth of a decade with brettanomyces.

For those who love waiting in line, GET HERE EARLY. We'll be releasing 200 Crowlers of the 2015 Foeder-Aged Orchard Ale (limit 1 per person) ONLY while supplies last. We'll also have all of the shank-a-stranger sales that come with the holiday -- because #capitalism -- so shop our Black Friday sale while you're here.

After our tasting room release, elevate your cider IQ at Flying Dog University's class on The Cider Making Process on Saturday, December 3. This course will explore the parallels between brewing beer and making cider, with each student making (and taking home) a case of their own dry-hopped hard cider. The day begins at Distillery Lane where you will tour the orchard, learn the basics of making cider, and make your own hard cider. Then, the class will move to Flying Dog Brewery for lunch, a brewery tour and guided tasting of the 2015 Foeder-Aged Orchard Ale and the 2016 Orchard Ale. To bring it all full circle, you'll take home a Crowler of each Orchard Ale release.