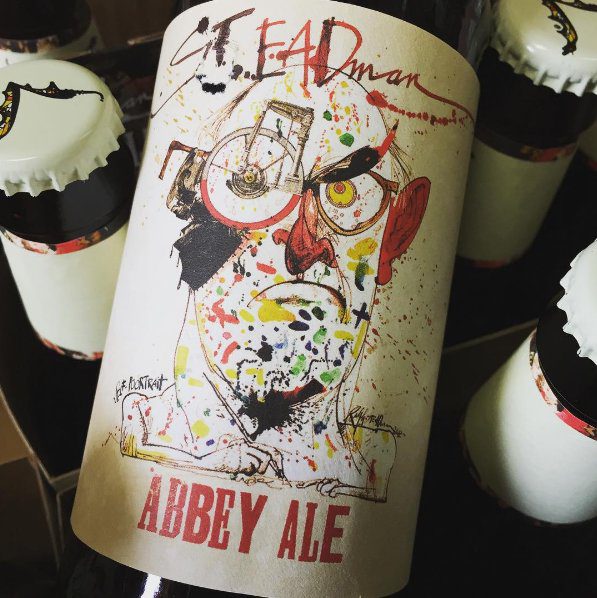 It’s a filthy habit indeed, filled with scamps, tramps, and sick and twisted souls. Luckily for us, our dear Ralph didn't listen. In 2017, St. EADman Abbey Ale joins our year-round lineup. Adorned with Ralph Steadman's "self-poortrait," St. EADman is our homage to Ralph, the last of the original Gonzo visionaries and a true Renaissance man.

For the uninitiated, Ralph was introduced to Flying Dog founder George Stranahan by his longtime collaborator, Hunter S. Thompson, and has been crafting original art for our labels since 1995. He coined the phrase "Good Beer, No Shit" on his first work for us (for Road Dog Porter), which landed us in our first of many First Amendment fights for free expression. Since then, Ralph has created over 50 masterpieces with us, ensuring that the liquid art in the bottle is worthy of the fine art on the label.

Steadman has been adding to his portfolio for over sixty years, famously collaborating with Hunter S. Thompson on Scanlan's "The Kentucky Derby is Decadent and Depraved," as well as Fear and Loathing in Las Vegas, Rolling Stone's "Rumble in the Jungle" and countless other weirrd experiences.

To know this is to merely scratch the surface. Once you go down the rabbit hole of Steadman's work, you will come across countless works of art, not just what splatters on his canvas, but an eclectic body that ranges from politically-fueled masterpieces to children's books. Ralph's illustrations of literary classics (Alice Through The Looking Glass, Fahrenheit 451 and Treasure Island) and contemporary classics like Breaking Bad are all iconic representations of his style that would be at home in your library and in a museum. In addition to creating art for the likes of The Who and Frank Zappa, Steadman is a musician himself; you can hear him with his ukulele on Johnny Depp's anthology, Rogue's Gallery: Pirate Ballads, Sea Songs, and Chanteys.

Ralph doesn't limit his work to beer either, his label for Cardinal “Spiced” Zin’ was banned in Ohio, he illustrated Oddbin's wine catalog and he released The Grapes of Ralph: Wine according to Ralph Steadman. For all the parents out there, it is never too late to get your children started on his classics including Inspector Mouse, Teddy! Where Are You? and The Little Red Computer. All staples for the healthy natural development of a child's mind. But perhaps it's best if you start your education with a viewing of For No Good Reason, the 2013 documentary that chronicles the life and work of the one and only.

Of course, it is best to do all of this with a St. EADman in hand. Track it down with our all-knowing Beer Finder.