Reform is (Hopefully) on Tap 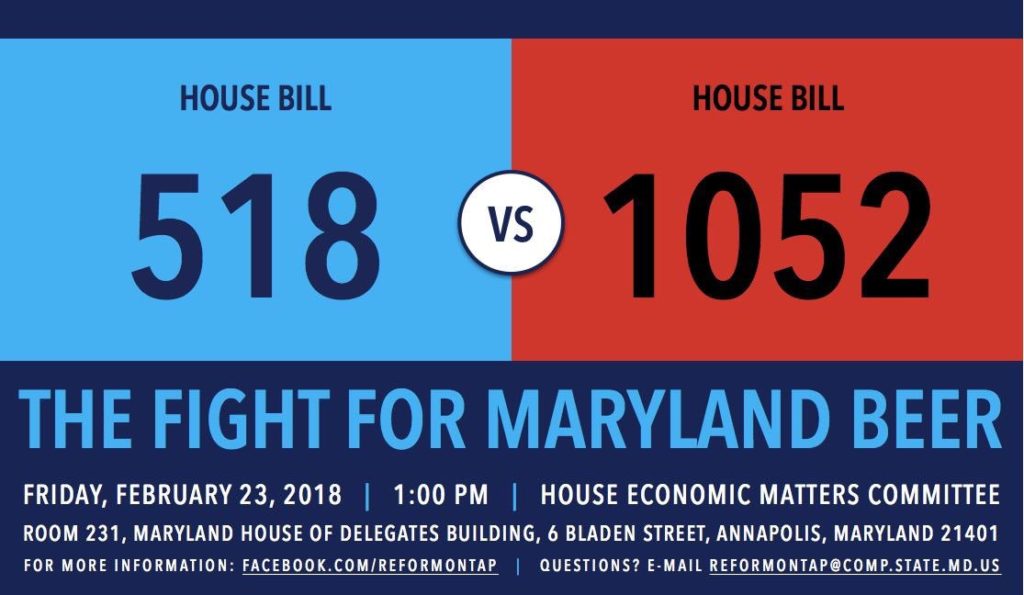 This afternoon, two bills that will inexplicably affect the future of craft beer in Maryland will be heard by the state's House Economic Matters Committee: House Bill 518 and House Bill 1052. Here is a statement from Ben Savage, our chief marketing officer and former president of the Brewers Association of Maryland:

House Bill 518 is a comprehensive revision of many of Maryland’s antiquated regulations on the beer industry that restrict both consumer choice and the growth of the craft beer industry. Flying Dog supports HB 518 for reasons outlined in both the Reform on Tap Task Force’s report, lead by Comptroller Peter Franchot, and the policy analysis completed by Maryland’s Department of Legislative Services.

The Maryland General Assembly has been clear in its opposition to reforming outdated beer laws and to the growth of Maryland’s craft beer industry. This was reflected by House Bill 1283 in 2017 and House Bill 1052 this current legislative session. The General Assembly seemingly (and schizophrenically) revised laws during one session and then voted to repeal those same revisions in a subsequent session. That back-and-forth approach to legislation creates unacceptable political risk for entrepreneurs and prevents Flying Dog from investing confidently in expansion in the state of Maryland.

Additionally, the General Assembly passed legislation in 2017 that provides benefits and privileges to Guinness (owned by Diageo, a $20 billion foreign company) that are not available to any new breweries that open in Maryland. This is a clear signal to Maryland’s existing 70+ breweries and others considering opening a brewery in the state that Maryland is not open for business when it comes to craft beer.

As a result, Flying Dog has permanently cancelled plans for a new, $55-million brewery on 32 acres of land that we acquired for that purpose. However, we remain unabashedly pro-free enterprise and pro-consumer choice and continue to support HB 518’s legislative reforms.

Furthermore, HB 518 would not be in existence if it weren’t for Comptroller Franchot’s 2017 Reform on Tap Task Force. The Task Force brought together representatives from all sectors of Maryland’s beer industry to discuss the complexities of Maryland’s antiquated beer laws and to develop a proposal to modernize those laws to reflect both the explosive growth in craft breweries and changes in consumer preferences. The Task Force’s report effectively summarizes the revisions that need to be made to Maryland’s beer laws so that both economic growth and consumer choice are no longer restricted.

Flying Dog appreciates the opportunity to have served on the Task Force, supports the Task Force’s recommendations, and applauds Comptroller Franchot’s leadership in the development of pro-free enterprise, pro-consumer choice proposals to reform Maryland’s outdated alcoholic beverage laws. The future of Maryland beer depends on HB 518, which will not only benefit breweries, retailers and wholesalers, but will also – and more importantly – benefit craft beer consumers and the Maryland economy as a whole.

What else do you, fervent supporter of craft beer and rabid fan of Flying Dog, need to know?

1. By doing things like reducing how much beer we can sell out of our tasting room and restricting sampling, House Bill 1052 will send Maryland craft beer back into the Dark Ages.

2. Even if House Bill 518 passes, Flying Dog will not pursue a new brewery in Maryland. After back-and-forth reform and repeal, it will take years for the state to prove that Maryland is willing to commit to craft beer. You wouldn't build a deck if you thought the zoning department would decide to ban decks next summer, would you? We didn't think so. Nevertheless, we support the reform in HB 518 and what it will do for Maryland craft beer as a whole.

3. If you also stand for free enterprise, consumer choice and the growth of Maryland beer, you need to contact your local state representative.

4. It's time to drink a Snake Dog. Because God knows we're going to.