Ralph Steadman is Coming to New York "For No Good Reason" 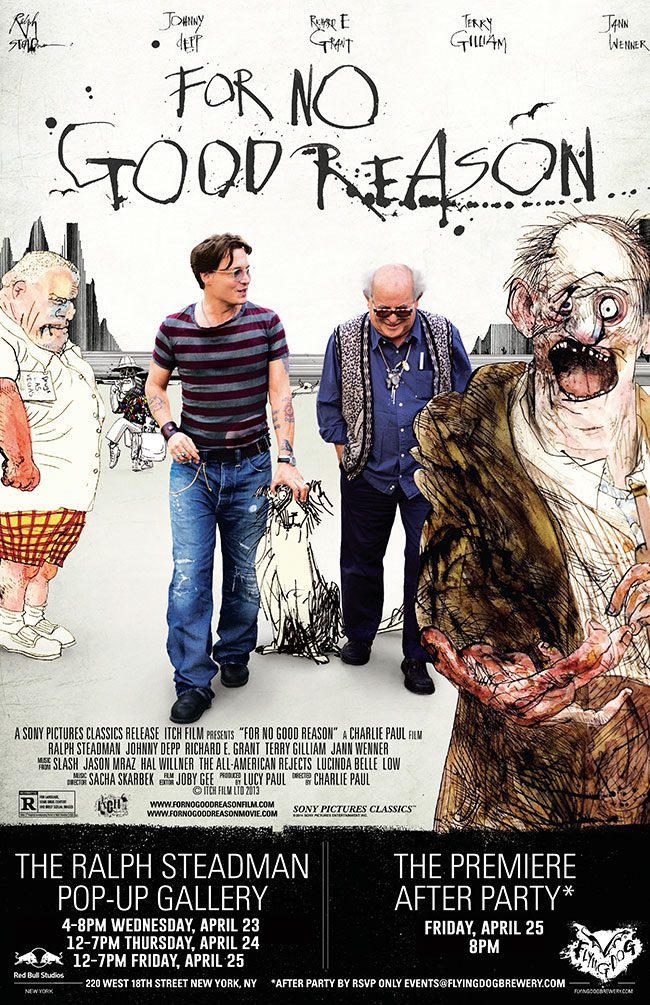 For the first time in over a decade, Ralph Steadman is coming to America. New York City, to be exact.

Beginning Wednesday, April 23, a limited-edition exhibit of Ralph's work will be open to the public at the Red Bull Studios in Chelsea. The exhibition, sponsored by yours truly, includes hand-printed photographs Steadman took during his first visit to New York in 1974 alongside silk-screened prints of his early political work with Hunter S. Thompson, original Polaroid pieces manipulated for his Paranoid series, and more.

This collection of Ralph's work was selected to mirror the stories unveiled in “For No Good Reason,” a documentary that invites you into his studio for an intimate portrayal of his life and work.

Joined by long-time friend Johnny Depp, "For No Good Reason" explores Ralph over the course of 15 years as he finds his voice through art and is driven by a sense of duty to change the world into a better place. It also features Terry Gilliam, Richard E. Grant, and Jann Wenner with music by Slash, Jason Mraz, Hal Willner, The All-American Rejects, Lucinda Belle, and Low.

The Steadman exhibition will run through Friday, April 25, which coincides with the New York opening of “For No Good Reason.” To celebrate, we're hosting a premiere after-party that night in the gallery space at Red Bull Studios from 8 pm to midnight.

The first 100 people to arrive with tickets from Friday’s screenings will be given priority admission. From there, the party is by RSVP only (contact events@flyingdogbrewery.com to get on the list).