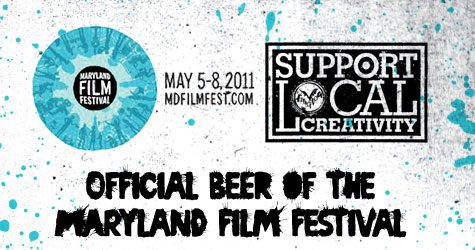 The Maryland Film Festival is an annual four-day event presenting top-notch film and video work from all over the world. Each year, the festival screens approximately 50 feature films and 75 short films of all varieties -- narrative, documentary, animation, experimental, and hybrid -- to tens of thousands of audience members.

In our continued effort to support local creativity, Flying Dog is the official beer of the festival.

For every North American feature film screened at the festival, the filmmaker attends the festival to present their work. The hundreds of filmmakers who have hosted screenings within Maryland Film Festival include such names as John Waters, Barry Levinson, Kathryn Bigelow, Jonathan Demme, and Melvin Van Peebles.

In addition to a range of contemporary North American films, each festival also includes a sampling of cutting-edge international features (including such titles as "Dogtooth" and "Syndromes and a Century"), a vintage silent film with live musical accompaniment, a classic 3-D film, and a feature selected and hosted by legendary filmmaker John Waters (whose choices have ranged from Joseph Losey's "Boom!" to Gaspar Noé's "I Stand Alone").

Flying Dog beer will be available at Film Fest-friendly spots nearby, such as Joe Squared, Wind Up Space, Club Charles, and Metro Gallery.