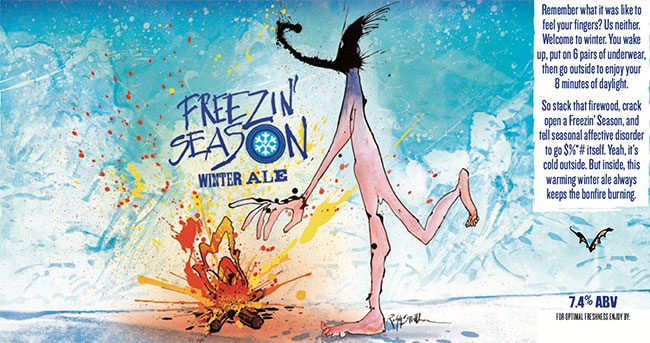 On May 13, 2022, the U.S. District Court for the Eastern District of North Carolina ruled in favor of Flying Dog Brewery, and against the North Carolina Alcoholic Beverage Commission (NC ABC), in Flying Dog’s lawsuit claiming that the NC ABC’s regulation allowing it to ban labels that the commissioners in their sole discretion feel are “undignified, immodest, or in bad taste” is a violation of the First Amendment.

“The First Amendment is the last defense against authoritarian and arbitrary government, and it must be protected against any and all threats,” said Jim Caruso, CEO of Flying Dog Brewery. “We are hugely grateful to our attorney, Marc Randazza, whose knowledge and passion for the First Amendment carried the day. With the First Amendment seemingly under attack from all sides, it is heartening to see court decisions like this that protect the freedoms that it embodies.”

Flying Dog’s case with the NC ABC began in the summer of 2021, after the brewery was notified that its label for the seasonal release Freezin’ Season Winter Ale – which was illustrated by world renowned artist Ralph Steadman and depicts a cartoon character standing by a fire - was rejected by the Commission. The NC ABC denied approval of the innocuous label because they thought it was in “bad taste”. Longtime defenders of free speech and freedom of expression, Flying Dog believed not only that this application of the regulation was a clear case of appointed bureaucrats trying to impose their views and preferences on others, but that the regulation on its face was unconstitutional.

Flying Dog won on both counts. The court’s ruling forces North Carolina to remove the current regulation so they are unable to reenact a similar directive again. Affirming that the First Amendment applies to alcoholic beverage labels is not only an important victory for all breweries, distilleries and wineries, but also for the First Amendment, the foundational freedom in a democratic society.

In their ruling, the U.S. District Court even cited Flying Dog’s precedent-setting First Amendment victory against Michigan in the Supreme Court, Sixth Circuit Raging Bitch IPA case, stating the ruling “should have placed any reasonable state liquor commissioner on notice that banning a beer label based on its content would violate the First Amendment."

Flying Dog has a long history of standing up against censorship. When the Colorado and then Michigan liquor commissions violated Flying Dog's First Amendment rights, Flying Dog sued and won both cases. While on the surface these lawsuits are about beer labels, they are really about defending the First Amendment at the margin, where virtually all battles of this nature are taking place. Civil liberties are not lost overnight, they are chipped away at bit by bit unless vigorously defended.