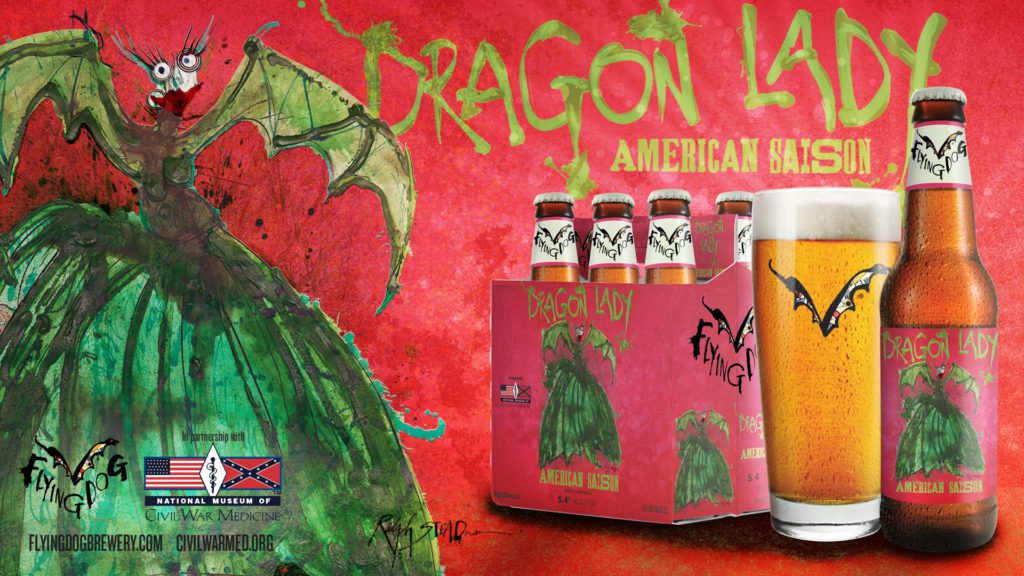 The looming shadows are a sign, the Dragon Lady will descend upon Frederick in the coming days.

We're speaking, of course, about our collaboration-sequel with the National Museum of Civil War Medicine. In our second installment, we honor the work of Dorothea "Dragon Lady" Dix. During the war between the states, she served as Superintendent of Nurses in the Union Army and earned a reputation as a badass fighting for the improved treatment of soldiers, mental-health patients and prisoners, which she continued well after the war.

Our Dragon Lady is a saison brewed with wintergreen, which was used by medical professionals for its antirheumatic, antispasmodic, antiseptic and carminative properties. It was also widely used as a pain killer at the time. We find this Dragon Lady kills a bit of the pain as well, at 5.4% she is sessionable, but one to keep your eyes on.

This will be an extremely limited release -- only available in Frederick and select Northern Virginia locations -- so book that Airbnb in Downtown Frederick, get your name on an upcoming brewery tour as well as the museum and check out our release events.

Mercy Street, inspired by real people and events, goes beyond the front lines of the Civil War and into the chaotic world of the Mansion House Hospital in Union-occupied Alexandria, Virginia. The PBS Original Series is getting ready to kick off the second season and you're getting a sneak peak. Join us as we welcome members of the cast and crew of Mercy Street for an exclusive screening of the first episode of the second season at the Weinberg Center for the Arts. The event is free, but you must register to secure your spot. Doors will open at 6 pm when attendees will be greeted with a sample of Dragon Lady, the screening will start promptly at 7 pm, followed by a panel discussion with:

The tasting room staff latched on to the fact that cross-dressing was a popular past time during the Civil War. Women would dress as men to get enlisted, men would dress as women to avoid being called to arms. Dorothea "Dragon Lady" Dix was no exception. She was known for wearing "men's clothes" throughout her tenure in the army and beyond as she found it more practical for caring for her patients. With all of this in mind, the team decided to host a drag party so while we always encourage you to be yourself, feel free to come as someone else.

Flying Dog University will host a 30-minute class on the development of the beer at the Civil War Medicine Museum, along with a guided tasting and food pairing from The Wine Kitchen’s Chef Jeff. It will conclude with an after-hours tour of the museum that highlights the Dorothea Dix story.

If you can’t make it to to the events and you're worried you'll never leave the brewery grounds once you visit, be sure to take a spin on the Beer Finder to see the locations you can find it in the wild.