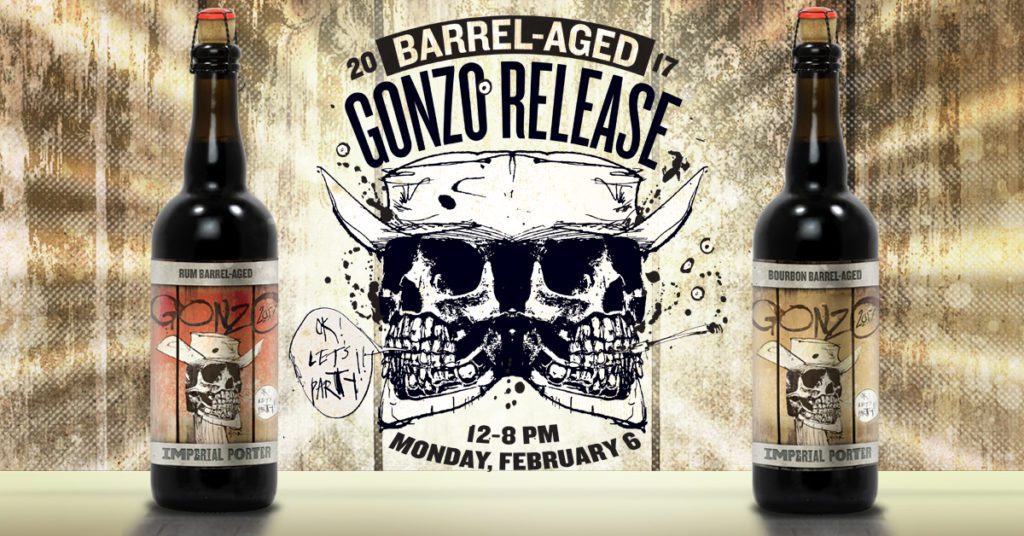 The nectar of Ye Gods will be released on Monday, February 6. Our iconic Gonzo Imperial Porter meets both bourbon and rum barrels, a dark and mysterious reality that most believe could only be a thing of dreams.

Following outstanding results with the Class of 2016, our brewers once again went down the road to A. Smith Bowman Distillery in Fredericksburg, Virginia for oak bourbon barrels seasoned to perfection. After three months in these barrels, Gonzo has taken on vanilla notes from the oak and soft whiskey warmth in addition to its already robust roast, chocolate and coffee malt character.

For the third year in a row, we continued the great experiment of Rum Barrel-Aged-Gonzo. These Caribbean rum barrels impart a distinct and warming sweetness to this malt monster. Trying both varieties alongside the OG (Original Gonzo) may show you the reason why you’re on this earth.

The brewery is the only place you can get 750 ml bottles of each, so cash in one of those sick days and get in line on Monday, February 6. Check out all of our release party details (including small-plate pairings and live art) and commemorate the occasion with a limited-edition Barrel-Aged Gonzo snifter.